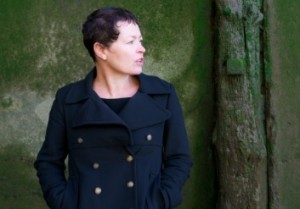 Creating a vivid sense of place is hugely important to a crime writer, and I consider myself very lucky to live in Wanstead. Not because its leafy streets, lakes and parks are exactly alive with colourful villains and grisly murders. In truth, the recent armed robbery that sparked a Flying Squad lockdown of the High Street was the only excitement I can recall in my 13 years living here â€“ unless, of course, you count the recent fracas over the Controlled Parking Zoneâ€¦ But Wanstead does lie a stoneâ€™s throw from settings that offer rich material for the crime writer in search of inspiration. Ducking and diving Cockney villains might have relocated to Essex mansions or villas in the Costas, but the East End is still a bubbling stewpot of characters from different walks of life, and from all over the world, trying to make a living â€“ and not always legally.

The hero of my debut novel is an Ã©migrÃ© Pole who settled here twenty-odd years ago and who acts as a fixer and private investigator for East Londonâ€™s Polish community, which became one of the UKâ€™s biggest immigrant groups after Poland joined the EU in 2004. Iâ€™m British born but having a Polish husband gave me a privileged â€˜inâ€™ to this world, allowing me to discover where East Londonâ€™s Poles hang out, their culture, food, and way of life.

When I started writing the book, Stratford was in the grip of the Olympic building boom, and one of my favourite local sources of inspiration was Londek, a Polish cafÃ©/restaurant near Maryland station. There I was able to eavesdrop on Polish builders as they filled up on the comfort food of home while swearing their faces off (if youâ€™re among Polish workmen, listen out for Koor-vah â€“ which literally translated means â€˜whoreâ€™ but which has become an all-purpose swearword used as a conversational condiment) In the evening, Londek attracts a more middle class crowd â€“ watch how many Poles dress smartly for dinner even in these informal surroundings! (Brits are among the regulars, too, and since you can BYO booze, itâ€™s a good value night out.) I also spent weeks tramping the Thames towpath east of Tower Bridge seeking a moody location for a key scene in which the body of a dead girl is found washed up on the foreshore. I started the search on the Isle of Dogs but the Docklands development renders the area a bit soulless. Further east, I discovered that beside the Thames Barrier, at low tide, great gleaming mud banks are revealed â€“ the perfect atmospheric spot for my dead body.

Another revelation was the semiderelict areas around Trinity Buoy Wharf (worth a visit for its arts projects). This is old industrial London, yet to be fully redeveloped, poised between the old and new, which somehow lends it a watchful, sinister quality.

On the east side of the wharf, I found Leamouth, the deep and spooky-looking brick-lined channel where the River Lea enters the Thames, which provided the setting for my denouement.

What about a mention for dear old E11, you might ask? Wanstead does get one namecheck in my book â€“ my heroine, a young rookie detective wakes up there the morning after a badly-behaved evening, and dismisses it as â€˜a burb full of twee shops selling vintage crapola.â€™ Well, we donâ€™t want everyone discovering East Londonâ€™s best-kept secret, do we? 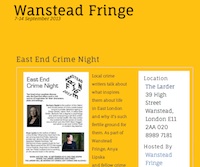 Anya will be taking part in the East End Crime Night at the Larder on Thursday 12 September when she and fellow crime writer Barbara Nadel, author of the Hakim and Arnold novels, will be discussing their work and reading from their books. All are welcome from 6.45pm for a 7pm start.