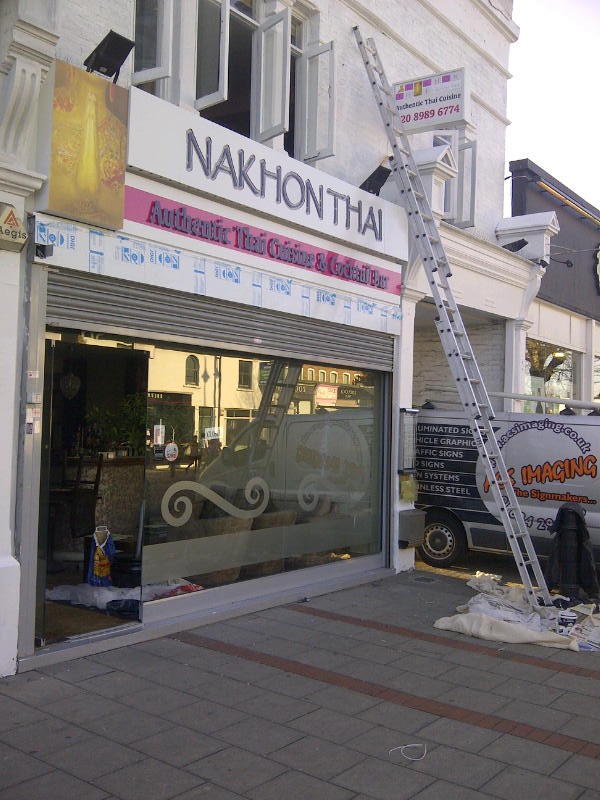 “A new Thai restaurant where 62 Spice was. Fantastic. They open (according to the builder) next Monday.”

Fellow reader Trevor adds:
We were told it was our last meal in 62 Spice on Friday evening, news which dismayed us seeing as we’re in there 3 Fridays out of 4 and believed it to be the best Indian in the area by miles (until we recently tried Kanchans at Gants Hill – fabulous!). Astounding to see the signage already replaced by the Thai place which is its successor (good luck with that!). How long did the Cooks – Provender metamorphasis take?
I wonder if the new owners are aware the Wanstead Society are obsessed with the frontage, and its apparent incompatibility with the conservation area (as opposed to neighbouring delights like Chicken Spot and Bairstow Eves!)?

Wednesday update. The Wanstead Society’s Geoff Horsnell adds:
It is very strange that the owner of 62 Spice has now decided to convert to a Thai restaurant. Yes, that is correct. It is not under new ownership. So now, in addition to the enforcement notice that was served in January as a result of the change in shop frontage, he has now decided to compound the problem by introducing internally iluminated signs. These are not allowed in a conservation area, and so Redbridge will have no option but to ensure that the signs are removed.

Also, as for the Wanstead Society being “obsessed” with the frontage, we in the Wanstead Society simply want to see Wanstead remain a pleasant area in which to live. To that end, people must abide by the rules and regulations that are in place. Without this, chaos would reign – and Wanstead would cease to be the pleasant place it currently is.