Getting with the Times: Purveyor of truth since 1785, the Thunderer has recently pronounced Wanstead to be ‘the new City bonus haunt’. Here’s an excerpt of what it had to say, with a link to some pages which are behind Mr Murdoch’s paywall: 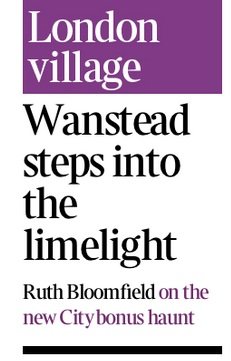 Some will no doubt cringe at this ‘City bonus’ sobriquet; brashness and lack of modesty are almost anti-Wansteadian traits. Nevertheless Times journalist Ruth Bloomfield neatly summarised the myriad attractions (good schools, Victorian to Edwardian houses and excellent transport links) while acknowledging the downside (relative proximity to Funky Mojoes). Talking of which…

High Street living: If you live on, or close to the High Street, you undoubtedly welcome the arrival of a new business of the calibre of Provender or Nakhon Thai. The same might not be true when certain globally-franchised vertical scoffing outlets loom large. The proposal to turn the current Wanstead Domestic Appliances into another fast food takeaway is an interesting one. Redbridge is accepting representations on this application right now. It would be So Good ™ to hear residents’ views.

Budget 2012: Unfortunately young Osborne’s Budget changes did nothing to help first-time buyers trying to swing a leg onto the property ladder’s lowest rung (unless they have a city bonus, naturally). As a knock on, there’s a likelihood that this bottleneck delays those trying to trade up from their first flat to a family home in somewhere like Wanstead. At the other end of the stamp duty scale, I wonder if we will see a local transaction being hit with the new 7% scalping applied to property sales over 2 million sovs. As I can never resist a nose, here’s what is being offered at a cool 250 large below the new upper threshold (warning: may contain gold taps).