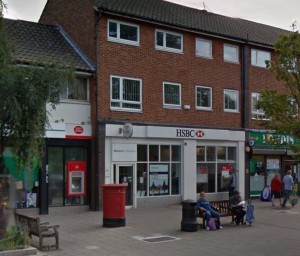 People are pretty cross that Wanstead’s HSBC is closing on 15 April, as we revealed yesterday.  Letters arrived with customers around Wanstead on Wednesday. The bank confirmed the closure in a series of tweets to Wansteadium.

@Wansteadium The Wanstead branch will be closing on the 15 April. We never take the decision to close a branch lightly and we 1/4 ^LB

@Wansteadium understand that it's unsettling for the local community. Unfortunately, with an increase in the use of online and 2/2 ^LB

@Wansteadium telephone banking in recent years we have seen the use of the Wanstead branch fall significantly. 3/4 ^LB

@Wansteadium Customers can use local post offices for their day to day banking and there are also free ATM’s in the area. 4/4 ^LB

Reader Steve Hunt disputed the bank’s claim of reduced customer numbers though. “It is not as if the branch is quiet. It is permanently busy. Utter madness,” he wrote on our Facebook page.

Dede Sposti wrote: “Bad news! 🙁 I now have no branch nearby work or homeâ€¦ and I am a business owner often working with cash..I will have to change bank.”

Saqib Khan said: “I had my business account with HSBC and the branch was of very little use. Counter service is no more than the post office option. We lost HSBC in 2014. That’s Woolwich, Barclays and HSBC gone since 2001. Next up will be either NatWest or Santander given they share back office processing where some NatWest customers are serviced by the Santander branch on the corner of the High St.

“The smart thing for personal customers would be to open a Nationwide account. For Business customers like me, take a pick from the other two, I chose Santander a few months back and it’s OK so far, better than HSBC anyway.”

As for what will take the bank’s place, there was consensus. A nailbar, coffee shop or estate agent.

One thought on “More on the Wanstead HSBC closure”