It’s been a hard few months on Wanstead High Street, with several closures and not a lot seeming to be going on. But suddenly there are three shoots which hopefully mean better times to come. 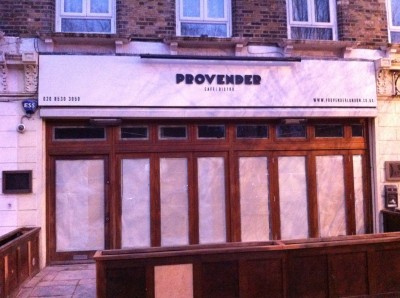 The first is the visible sign of a new restaurant in the former Cooks/Seasons spot. As the photo attests, it is to be called Provender Cafe Bistro, and if its website is anything to go by (they usually are an indication of a discerning nature, of course), it could be pretty swish. Lunch options have been feeling a bit limited in Wanstead of late, and so with 80 seats to be available here, it’s surely a good thing. The only downside is that the Snaresbrook end of the High Street seems ill-fated, but if Provender can become a destination that will surely help.

The second is a new dress shop coming to Wanstead. Dress2Party is advertising for staff for a new branch (it has them in Mill Hill and Cheshire) and bills itself as specialising in dresses for birthdays, proms, weddings and bar mitzvahs. It seems likely that the shop will be opening in the former Knock Down Ginger location.

The third is taking shape at Wansteadium’s spiritual home, in the former Andrews’ Builders’ Merchants. As we first revealed, it is shortly to become a fabric shop. Some impressive work has taken place to renovate the site, including the long-overdue making up of the pavement into Woodbine Place.