The general election is nearly here, and we thought it might be useful to give you some facts to arm yourself with before you go to vote.

Please note the information at the bottom of the page about deadline for registering to vote or to get a postal vote, and also that there is a climate and environment hustings with all candidates at Wanstead Library on Monday evening. Details below.

Comments or suggestions about this page are welcome to info@wansteadium.com.

The old nets which had outlived their usefulness have been dismantled and the topsoil removed in preparation for the installation of a new surface and structure, which will take place in the New Year.

The club has raised the money in the past year and received a number of significant grants, one of which recognised the role the club played in social cohesion. It is now turning its attention to further fundraising for refurbishment of the pavilion and changing rooms.

Wansteadium reader Alex writes asking for help:
“I have lost a set of car keys in a black pouch . They were dropped on Friday 15th November around 5pm. I suspect they fell somewhere along the grass verge along Spratt Hall . I parked opposite Chaucher Rd and walked to the park opening, that is opposite the old Police Station. Like a fool I was kicking up the leaves, and suspect the keys fell from my pocket along there! I am happy to pay a reward. I have spoken to road sweepers and the council, but not too helpful so far. So I am pleading for your help.”

We will forward any emails to Alex if you can help – contact us on info@wansteadium.com

Not that there’s much else going on at the moment, but Leyton and Wanstead MP John Cryer and fellow MP Ellie Reeves are bound to be a bit otherwise occupied for a little while – their son was born on Monday morning.

In case you’ve not already seen @elliereeves tweet. We are delighted that our baby boy was born this morning, weighing 9lb 4oz. Everyone doing really well, Thank you to the wonderful staff at the birth centre!

@JohnCryerMP and I are delighted that our baby boy was born this morning, weighing 9lb 4oz. Everyone doing really well, just a bit exhausted!Thank you to the wonderful Midwives at Lewisham Birth Centre for all of your care and support.

Our congratulations to them both. And with one eye on the future, if Baby Cryer should become another member in the Cryer political dynasty (both of John’s parents were MPs), let this blog post become part of the public record.

Both John Cryer and Ellie Reeves have been re-selected by their local Labour parties to stand in the general election.

Good luck to Heron’s Nest Cakes, a local gem, whose fantastical creations regularly grace the Wanstead Local Makers’ Markets. Business is booming and they have this week transformed from home business to having their own high street baking premises. Living the baking dream!

When I started out, I was buying flour and sugar in 1kg bags from my local Co-op on Wanstead High Street. 4½ years on, I’m buying 25kg sacks from a wholesaler. Can’t thank my cake obsessives out there enough, I would not be opening this pop-up but for you all!

Their new shop is in the Galleria arcade which is next to M&S Food on George Lane and will definitely be worth a visit when one is passing.

We still affectionately remember hearing the BBC’s Jonathan Agnew nearly being brought to tears when Heron’s Nest delivered a specially made Manuka honey cake to the Test Match Special commentary box (Aggers was an advocate of the health benefits of the honey).

You can see more of their creations on Instagram.

Autumn is well and truly here! That means gorgeous autumn flowers for this 2 tier cake! Orange with orange curd on the bottom layer, lemon with lemon curd on the top layer. Flowers from Lizzie Fiori in Woodford Green!

Best wishes to owners of a lost ferret, and bravo for having an interesting line in pets. Fingers crossed he’s returned safely.

The poster does, however, remind us of that legendary moment five years ago – how time flies! – when this bit of litter was spotted at the top of Grosvenor Road. 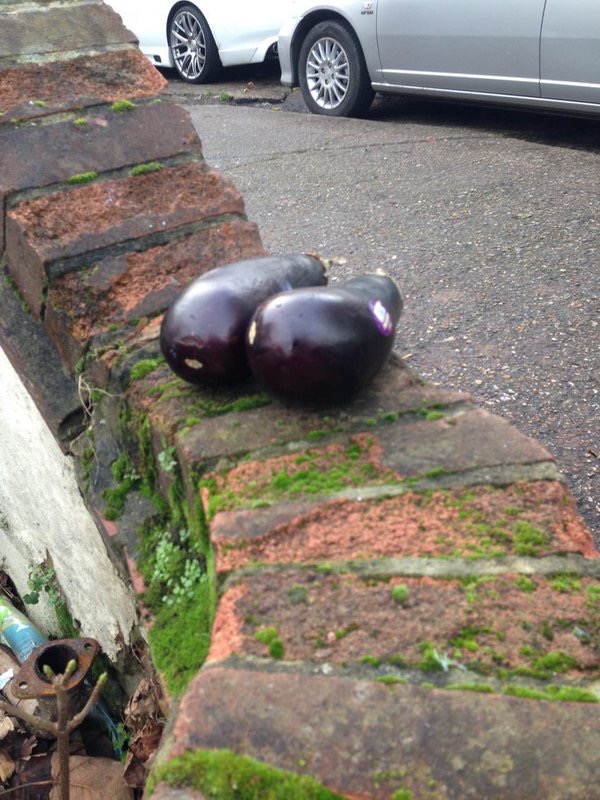 PS.  If you have the said ferret, drop us a line here and we’ll put you in touch with the owner. If you want to claim the aubergines, sadly they are now past recovery.

Join the 1,993 other readers who get Wansteadium updates by email, once a day, when events demand