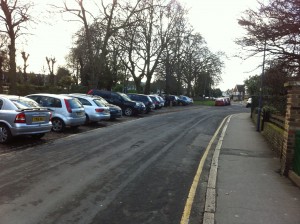 The opponents of the increased restrictions on parking on streets around Wanstead High Street have started mobilising their campaign ahead of a review of the schemes which is due next month.

At a council meeting in Wanstead earlier this week, business owners and opponents of the restrictions lobbied Redbridge councillors. The campaigners who last year collected more than 5,000 signatures against proposed pay and display machines have begun campaigning again.

Residents’ only parking was introduced for a 12-month period last year on several roads in central Wanstead, including Spratt Hall Road, Dangan Road, Addison Road and others. The introduction came after residents showed that websites were advising commuters that they could easily park on the streets during the day for easy access to the Central Line. As a result it became impossible for many residents to park near their homes. Councillors say they had to respond to the residents’ concerns.

The restrictions had their desired effect – one resident of Spratt Hall Road said approvingly that there were so few cars parked there during the day that it was like the aftermath of a nuclear war. But casual shoppers, shopkeepers, local business and parents dropping children at nurseries and schools were not so impressed, saying it made central Wanstead like a no-go zone.Â As Wansteadium noted earlier this year, the residents’ only parking was extended to an area outside Christ Church where there were not actually any residents.

Wansteadium reader Diana Watson said there was “vociferous opposition” at the Area 1 committee meeting held on Monday this week. Â She said the overwhelming suggestion of people in attendance was the reintroduction of a one Â or two-hour parking ban each morning to exclude commuters but allow “the good people of Wanstead to go about their business and avail themselves of the activities and services in the community”.

Campaigner Michael Powis has now contacted supporters to encourage them to contact the council ahead of next month’s review. He says: “These were popular places for people to stop off for an hour or two andÂ parkÂ to visit the shops, cafes, doctors and voluntary community activities etc. etc. Surrounding roads, where the one hour ban has worked for many, many years, have now experienced displacedÂ parking, further restricting usage of spaces.” He says the restrictions create an atmosphere “which says KEEP OUT to the visitors that help support our High Street, which residents alone cannot sustain”.

Residents of the streets in question, who according to surveys support the measures, are not likely to be happy with the “one hour ban” proposal since without some greater refinement it would it impossible for them to leave their cars outside their own homes during the day. At an area two committee earlier this year one resident suggested that the residents parking system be retained, but be restricted in its hours of operation to 0930-1030 each weekday. This would, he said, keep commuters out, allow residents to park, but also allow community use during the day.

The campaign is likely to heat up further during the next few weeks, but the council and its officials find themselves in a tricky position where they will have to find a balance between the interests of residents and the wider community.

5 thoughts on “Parking around Wanstead High St: The pressure builds”