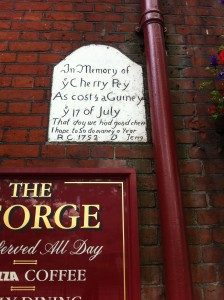 May we propose a new Wanstead tradition – the marking of Cherry Pie Day, as immortalised in the somehow unexplained plaque on the side of the George. The sign dates from 1752 – well before the current building on the site. Wanstead historian Winifred Phillips thought that it perhaps celebrated a fruit heist (our phrase, not hers), but no one really knows.

It is however one of the best known Wanstead landmarks, so whatever the story, let’s start marking the day. Suggestions for ways to mark it are welcome.

I heard an explanation from an old resident years ago, a workman was up a ladder leaned against the wall and stole a cherry pie from a vendor who passed by with a tray of cherry pies on his head. The workman was brought before court for this minor crime and fined half a guinea, hence the “cherry pey as cost half a guinea.”. However as you point out, as the current George building is only just over a hundred years old, how this plaque came to be in the wall or where it was from originally, I have no idea.