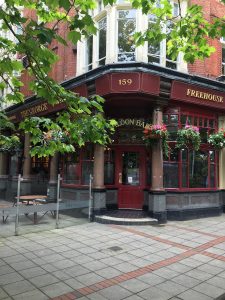 The portrait of Winston Churchill which is compiled from dozens of photos of Wanstead residents will return to the George Inn, Wansteadium has been told. The massive picture has been taken down, a spokesman for Wetherspoon’s told us, because it had water damage and needed repairing. He said they were going to repair the picture and then put it back in the George, though possible in a different position.

Yesterday we reported that it had been taken down, with rumours that it would not be returning, which were not going down well with customers. The portrait was made by local artist Carole Edrich and was donated to the pub at the launch of the Wanstead Art Trail in 2010.

Carole told us: “I made it specifically for The George and it comprises hundreds of pictures all taken within a quarter of a mile of the bust of Churchill outside Manor House.” It took weeks to create, she said. Art Trail co-ordinator Donna Mizzi said the work was “fantastic… the picture of Churchill became clear as one stepped into the main entrance of The George, as the angle was just right.”

Wetherspoon’s said it would be contacting Carole to discuss the future of the portrait.