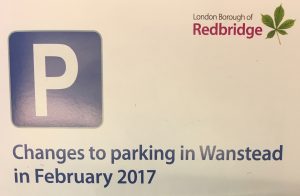 In the eight years of this website, we have never taken a political line on any subject, except perhaps the welfare of hedgehogs. There are plenty of issues we care about – a healthy balance of shops in the High Street, for example – but no overtly political positions.

That is until today. We’re breaking with tradition to take a very clear position about the proposals for changes to the parking rules for Wanstead.

Redbridge Council must back down now and do the proper consultation on these proposals which it should have done in the first place.

We know that opinions on the matter among Wansteadium readers are divided, and that there are pros and cons to the proposals. For example, having a mechanism to stop people parking all day long on the High Street while they walk to the Tube to go to Westfield would, in our view, be a good thing. But stopping people parking on roads as far away from the High Street as Overton Drive does not appear to have been thought through.

But regardless of pros and cons, what seems to unite nearly everyone is outrage at the way the proposals are being imposed on Wanstead with no opportunity for debate or consultation. The leader of the council, Cllr Jas Athwal, who has up until now struck us as a fairly decent sort of bloke, seems to be revelling in his outright refusal to consider any form of consultation.

Pretty much the first thing the Labour administration did on taking control of Redbridge Council following the elections in 2014 was to scrap the system of area committees. These were bi-monthly meetings at which residents in Redbridge boroughs could listen to and question their own local councillors and council officers. The committees were replaced with a series of inadequate borough-wide forums at which there is no opportunity for Wanstead residents to question Wanstead councillors or council officers about Wanstead issues.

Previous attempts at parking reform were just the kind of subjects that were discussed at these meetings – and of course people felt strongly about them. Cllr Athwal’s verdict? The “Tories… just wilted under pressure from residents – that is something I will not do”.

But with no meaningful local meetings, no consultation, and no debate, it does make one wonder if Cllr Athwal would be so reckless in an area which had more than just a couple of Labour councillors?

We have just one question for him: what do you have to lose by doing a consultation in the proper manner? The proposals might even be improved by some public debate – after all, the 0930-1030 “residents only” parking restriction in Wanstead streets came as the direct result of a suggestion at an area committee. Wansteadium knows, because we were there when it happened.

Unless Redbridge Council undertakes to do the proper consultation, it’s hard to avoid the suspicion that this scheme is nothing to do with improving parking – it’s simply an easy way to raise cash for the council. For a political party to do that in an area where it doesn’t stand to make significant electoral losses would just be shabby. It’s time to show that that’s not the case.

54 thoughts on “Show us this is not just shabby”