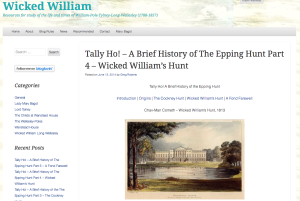 Keen watchers of the Wanstead-based Twitter stream on this site may have noticed references to tales of the Epping Hunt recently. It’s all part of a developing website telling the story of Wicked William – the man whose recklessness denied all subsequent generations of the joys of the formerly magnificent Wanstead House.

Now would be a good time to have a read of the site if you haven’t already. Written by historian Greg Roberts, the latest instalment tells the story of how Wicked William, eager to impress, took on a “ludicrously quadruple-barrelled” surname (“Pole-Tylney-Long-Wellesley”) but how his Wanstead neighbours insisted on referring to him as just “Long’ – and then writing rude verse about him.

It also tells of what was to become the Toby Carvery, and how Long was just too flash for his own good, literally throwing money around. It’s a well-written and lively account and is worth following. You can find it here. Wansteadium will post occasional updates.