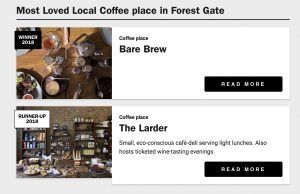 Time Out has belatedly realised that Wanstead is not part of Forest Gate, following complaints from two Wansteadium readers.

Last week we noted that the magazine’s Love London awards had given accolades to Bare Brew, The Larder, Manor House, Luppolo and the Duke – but had classified them all as being part of Forest Gate.

Readers @lovevintagecary and Andy wrote to the magazine pointing out the error of their ways, and both received assurances that next year Wanstead would be classed as Wanstead. The error had come, apparently, because they had taken their definitions of neighbourhoods from Google Maps. Andy offered to post them an A-Z, while Cary proved her point with copies of Boundary Commission maps.

Next year, they were told, things would be set right. We’ll be watching.