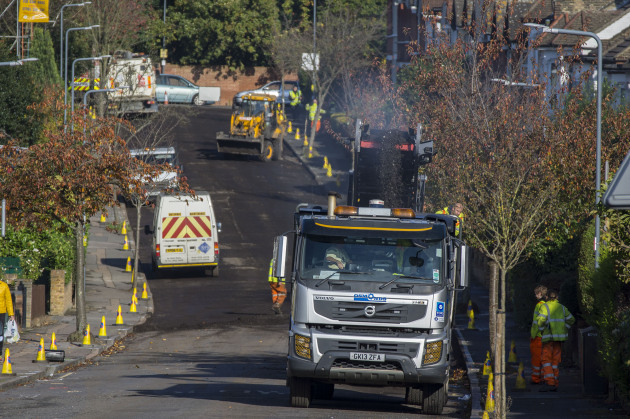 Resurfacing work going on in Wellington Road on Monday, before similar work is due to begin on Wanstead High Street. At least one longtime resident of Wellington Road insists the last time it was resurfaced was in the early 1980s – can this be true??

It will, in any case be welcome for residents, especially since it is due to be accompanied by the installation of speed humps. Eight humps are to be put on Nelson Road from its junction with Hermon Hill, and on Wellington RoadÂ itself. It follows a long campaign by people living on the road against motoristsÂ using it as a way of avoiding the traffic lights at the bottom of Hermon Hill.

Wansteadium clearly hasn’t been concentrating enough, though. The last it knew about the subject was during an Area One committee in November 2012 when residents were told that Wellington Road had been judged 112th in Redbridge’s prioritised list of traffic problems, and that there was only enough money in the budget to fund eight to 10 schemes per year.

5 Comments on "Victory for Wellington"