With British interests riding high in the Tour De France, and equally high hopes for GB cyclists in the Olympics, cycling is enjoying a pretty high profile at the moment. What a good time to publish a book about a British cycling hero. Step forward Wanstead journalist Robert Dineen. Wansteadium met him for a chat while waiting for the lights to turn green on Hollybush Hill. 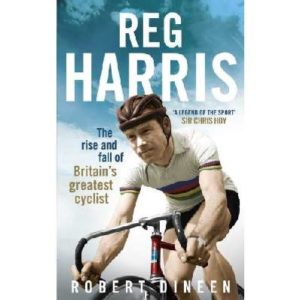 Wansteadium: Robert, congratulations on the book launching this week. Was much of it researched and written in Wanstead? Did any local places help inspire
you with the project?

Robert: Thank you. I actually wrote all of it in my flat in Wanstead, and most of it in my cellar, which is converted into a study. I find it easier
to work without the distraction of a pleasant, leafy view. My research was divided between face-to-face interviews, long days spent in libraries – most often the National Newspaper Library in Colindale – and, yes, at home, either through telephone interviews or reading various research material. I’m not sure if I was inspired by a specific Wanstead landmark, but I would reward myself with a trip to meet mates in the Cuckfield once I had completed a certain number of words. Usually, I would visit the library or the secondhand book shop on the High Street but I tended to avoid reading books while writing mine because I found others’ work a bit intimidating. It’s been quite nice to be able to go back to both places since finishing it.

W: The story is about one of the greats of British sport, who rose from poor beginning to become a world champion and adored sportsman. It sounds very compelling – how did you identify with the main character Reg? The dustjacket precis notes that he was “driven by an insatiable need for wealth, women, fast cars and fine wines”.

R: That is something I had to think about. Partly because of his ambition, single-mindedness and perceived selfishness, Reg invited a lot of criticism from people who knew him. But I tried very hard not to sit in judgment of him, partly because he is not alive to put across a defence, partly because he inspired jealousy that I think tainted some people’s views, and also, of course, because that would have been to the detriment of the book. Instead I tried to sympathise with him, which was in the end was not too difficult. I think all blokes can sympathise with a desire for those things mentioned on the dustjacket, it’s just that very few of us get them, and certainly not all at once and as young men, like Reg did. I thought I could also relate to his selfishness because writing a book is a very selfish thing to do. To get it done, you basically need to put everything else in your life – including friends and family – aside for about a year.

W: Do you cycle much yourself?
R: I cycle most days, commuting from Wanstead to Victoria, which takes just under an hour. Quite often, I cycle into Epping Forest, too, or along the River Lea and on to Broxbourne, where I grew up. I have trained for a triathlon and hope to go on a touring holiday in the Autumn. I’m looking forward to all of the cycling at the Olympics but especially the men’s sprint. That was Reg’s discipline, Britain have a great chance of winning gold and I think it is the most compelling
event on the track. The men’s road race should be fascinating too, given the strength of the Brits and that Cavendish is so good.

W: Any advice for anyone considering their own literary projects?
R: Tough one. People have written entire books on how to write a book and on how to get one published. But I suppose it’s most important not to give up and not to compare yourself to other writers. It’s also best to write in short sprints, like Reg, 20 minutes on, then a 5-minute break.

You can buy a copy of Rob’s book here: Reg Harris: The rise and fall of Britain’s greatest cyclist