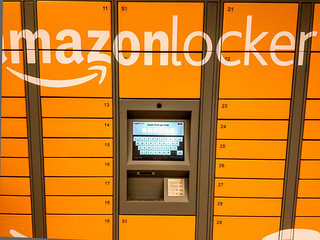 Getting stuff delivered from Amazon in Wanstead is about to get much, much easier. A sneak peek inside the Co-op, mid-refurbishment, reveals a bank of Amazon Lockers along the back wall. This is a service offered by the firm in which you can opt to have things delivered to a combination-coded locker rather than having it delivered to your house.

It will allow people not at home during the day to pick up their Amazon deliveries on the way home, instead of returning home to a ‘Sorry You Were Out’ card. And since the Leytonstone Sorting Office has become – to all intents and purposes – impossible to reach except as part of a major expedition, it will reduce the need to go there.

The Co-op has been introducing these lockers in some of its London stores in recent months. Reports on blogs suggest there are only 40 lockers in each branch, which has caused some to wonder if that can possibly justify the space the lockers take up on the shopfloor. But regardless of that, for people living in Wanstead who are not at home during the day, this will be a significant improvement.