Wansteadium’s new property blogger George C Parker’s regular update on the property scene in Wanstead. If you spot intriguing For Sales or Solds in Wanstead, Snaresbrook or Aldersbrook, let George know, via georgecparker@wansteadium.com.

It seems Olympic gold is within reach of all of us – not just the Lycra-clad fitties who will descend on Stratford in July 2012.

Beautician Virginia Williams (@VWSkinCare) tweeted this week ‘Â£28k offered to a client in Wanstead for renting her house out during the Olympics. Might reconsider closing my studio for two weeks!’.

Reading this, I nearly fell off my exercise bike. This indeed was food for thought. Time I got myself booked in for an eyebrow-sculpt, I thought, and at the same time I began to consider Olympic lets in Wanstead.

The Daily Telegraph was out of the blocks before me. Declutter and check with your mortgage company is the sound advice for those looking to let.

The next step was a Google search to assess the competition only to find that some enterprising Wanstead residents have already lapped me. Indeed, I found an array of properties to suit all budgets – even those on a thick VIP expense account. For a mere Â£750 pounds a night, I could stay in a double bedroom here (bathroom shared). The single is only Â£500/night, but does come with TV and hopefully a breakfast of champions.

Anyhow, with cash like this sloshing around, I admit I considered renting out a wing of Parker Towers, or two. However, I thought to myself, Mrs Parker would probably object and anyway, I’d be limiting my potential income. Maybe I should get hold of a former church building and set up Wanstead’s first pod hotel?

• Another SOLD sign stands proud in graceful St Mary’s Avenue, and I suspect that the small bungalow occupying the current plot will soon be given short shrift. Both neighbouring properties are beautiful red-brick mansions, and there is ample room to bring another house of similar size to bear in keeping with its peers. Marketers Churchill Estates waxed lyrical… “considered to be Wanstead’s premier turning, St Mary’s Avenue… The plot size is approximately 44ft in width by 164ft in length and offers tremendous scope for extension or even the possibility of demolition of the existing property and the erection of a brand new property on the site (subject to planning permission). Plenty of interest is expected as properties like this are extremely rare in this location.”

This would follow an established trend as developers continue to upgrade the housing stock on this elegant, chestnut-lined avenue. (Presumably they know about the decline of the chestnuts though…)

• Talking about bungalows, I’m curious about one at the other end of our sphere of interest, in Sylvan Road near Snaresbrook station. It seems this bungalow has been almost (if not completely) rebuilt into what now looks like a massive property now (see before pic – thanks to Google Streetview – and after, below). And yet the whole thing doesn’t appear to be very much higher than it was in its original state. It all looks very smart. If it’s your property or you know anything about it, I’d be delighted to hear from you (georgecparker@wansteadium.com) 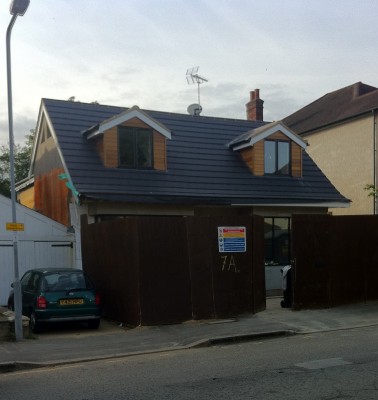