The guerrilla in our midst, Marian Temple, writes:

“After four working parties, all those manky bits of sad soil where shrubs had died over time have been tidied up and either planted or sown with wild flower seeds. It was really fun to do and for me to meet people I didnâ€™t know, all of us happy to do our bit for Wanstead which is such a brilliant place to live. The kids were marvellous at raking out bottles and cans and we ended up with sacks of recyclables and stuff for the green collection.

“Keep your eyes open next month for glorious old fashioned scarlet geraniums flowering on the outside patches where the cars turn towards St Maryâ€™s Avenue. Another car patch, where the traffic builds up waiting for the lights, has been planted with teazles and wild flower seeds. That nice little semi shade patch, the last on the right going towards Mansfield Road has been planted with foxgloves and primroses and no doubt Iâ€™ll keep planting as I come across excess Corner House stuff that would be happy there.

“Just one small patch remains to be done and thatâ€™s being saved for a little girl who didnâ€™t make the work parties but is desperate to make her mark. That bit has her name on and will be done in time.

So what about the future?
“Ah, thereâ€™s a question. Maintenance is the name of the game. Hopefully, everybody who took part will keep an eye on the Wanstead Station surrounds having taken a sort of possession of it by their efforts. Maybe every so often, Iâ€™ll use Wansteadium to gather forces for a general weed and tidy up as needed.

“Re. the thorny question of litter, (amazing subject, everybody thinks itâ€™s everybody elseâ€™s job to deal with it!). The important thing there is to prevent a build-up. Cans and bottles lying around indicate that this is an ok place to drop â€˜em. The trick is to get rid of them. Itâ€™s no shame, (quite the opposite in fact) to remove rubbish and put it in the bin. An immediate improvement and it gets rid of the subliminal message that this flower bed or bit of pavement is just right for the can I donâ€™t need any more.

“Thanks to all those who took part. A good time had by all. Watch this space for future call ups and enjoy the fruits of your labour. Just hope to goodness that the seeds germinate!”

PS. Wansteadium reader Bente Dahl adds that Wanstead Station is not the only one getting the gardening love. 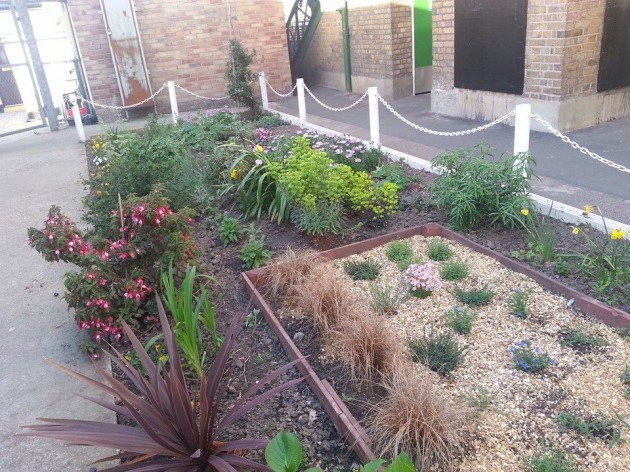