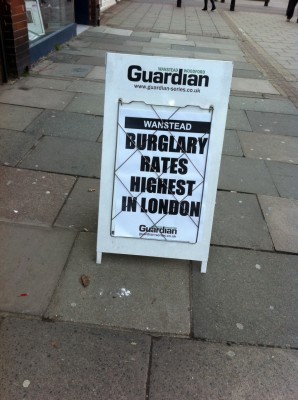 There was at least one cross tweet about the Wanstead Guardian billboard (pictured) last week, and no doubt some degree of eyeball rolling by Wanstead loyalists.

There are probably relatively few people who feel that Wanstead is the worst place in London for burglaries. The new police crime maps do indicate, however, that in January Wanstead ward was one of a number contributing to a high burglary rate in Redbridge – marked in red on the map below. Snaresbrook did not, however, and it’s worth noting that while any burglary is a pain in the neck, the actual numbers are as follows: 28 burglaries in Wanstead ward in January 2011, compared to 20 in December. Snaresbrook had 7 and 11.

It’s always good too to keep an eye on the bigger picture, not just on burglary. Snaresbrook has the lowest overall crime rate of any ward in Redbridge (4.24); Wanstead is higher (8.69) but by no means the worst in Redbridge – there are seven worse. And in the context of neighbouring boroughs, thing become even clearer.

One thought on “Wanstead the worst in London?”