Some months ago there was mystery over a bid which came from a Wanstead company to bring Formula One to the streets of London, culminating at the Olympic Stadium. For a couple of days there was fascination with the notion, but then F1 bosses appeared to downplay their involvement in the scheme and it seemed to go quiet.

Wansteadium was much interested in who the firm was, since we couldn’t find any mention of a company by that name in the official register of companies, nor could we find any other evidence that they existed. They also didn’t appear to have a website, which we thought odd. 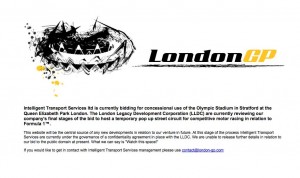 Now at least on that last point there is some movement. We have been directed towards this website which, because of a confidentiality agreement, gives little away but does at least demonstrate that the bid is still alive.

We’re still interested in knowing who exactly are the Wanstead folk behind the bid. (Maybe it’s you and you’re reading this. If you are, this is for you.)