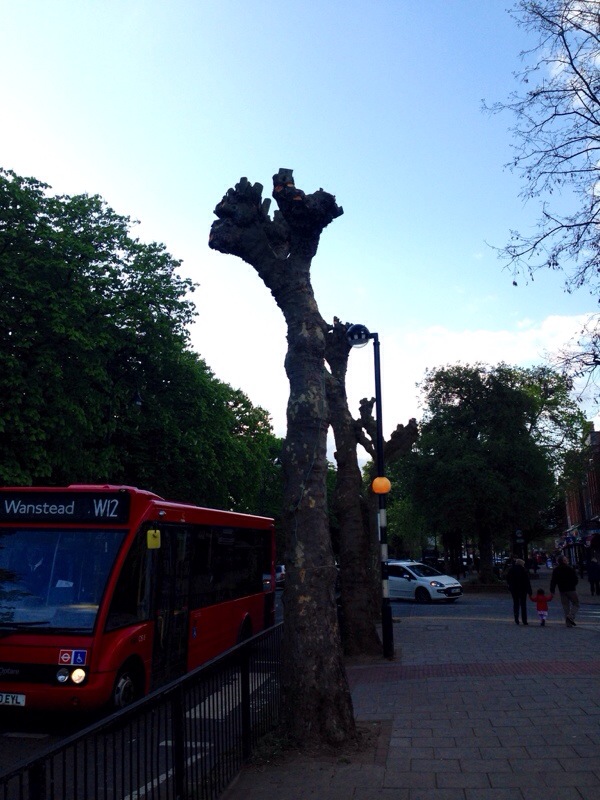 Last month Wansteadium wondered if the seemingly brutal pruning of the fine London plane trees on Wanstead High Street, which leaves them bereft of leaves and indeed branches, was being done at the right time of year.

After all, itâ€™s one thing to know that a tree species responds well to this rather severe pruning (or pollarding, as itâ€™s called). But itâ€™s another thing for that pollarding to take place in the middle of the growing season. Isnâ€™t that a bit like closing Selfridges for redecoration in the middle of December?

We asked Redbridge Council for a statement of their policy towards pollarding. It turns out we were right – this is NOT the time of year for pollarding to take place. The council told us: â€œThere are 1,611 Highway trees that are maintained as pollards. This year work was scheduled to pollard 866 of these trees between January and March. Due to emergency tree works resulting from the high winds experienced since October 2013, the routine programme could not start until the middle of January.â€

However, this is not necessarily a disaster. The councilâ€™s tree experts say that the planes on Wanstead High Street are â€œrobustâ€, and â€œshould soon produce vigorous new growthâ€.

So, readers of Wansteadium, please be like Norman Lamont and keep an eye out for green shoots of recovery.

2 thoughts on “Wanstead’s trees: Update on the odd pruning”