Longtime readers will know of Wansteadium’s interest in bees, such as this colourful tale of honey production. That particular tale had an unhappy ending, however, with all of the hives in question dying out because of last year’s long winter. 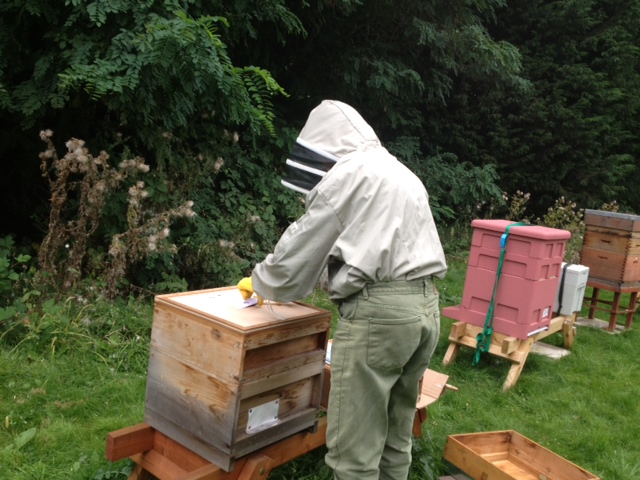 But there is happier news on the horizon. A scheme by Wanstead Friends of the Earth is aiming to distribute bee-friendly seeds all around Snaresbrook this year for planting at the base of street trees.

Organiser Ann Williams says: “The general idea of planting-up tree-pits is to provide â€˜corridorsâ€™ of pollen-bearing flowers in every street, to feed bees and other pollinators, and to reduce the need for the council to spray the tree-pits with pesticides and herbicides. Wild flowers donâ€™t need fertile soil; all thatâ€™s needed is to loosen the topsoil around the tree-roots, scratch shallow trenches, and scatter the seed, covering it lightly.”

An experiment on Gordon Road last April looked wonderful, she says, as well as helping the bees out. The group now wants people in Snaresbrook Ward to volunteer to be street co-ordinators and organising the sowing in April and May. Ann says: “This should give a good display in high summer/early autumn, and all thatâ€™s needed is a little light watering if the weather turns really dry. If possible (and if the seed holds out) we might consider a second, autumn sowing to bring up flowering plants next spring.”

The scheme is being backed and funded by Redbridge Council and by an Olympic Legacy Grant, and if it’s a success could extend further. Anyone interested should contact Wanstead Friends of the Earth, who are holding a launch event at Wanstead Library on Friday 25 April when the film More Than Honey will be shown.

Since Wansteadium is slightly obsessive, we’ll be keeping track of the scheme. We will try and recruit our favourite nonagenarian gardener Ron to the cause, as well as celebrity lawyer and beekeeper Mark Stephens. And after much consideration we will be labelling future articles here with the inspired name BeE11. Genius.