A developer who is renovating a house is asking a favour of Wansteadium readers.

HM writes: “We are involved in the renovation of a house on Spratt Hall Road, roughly opposite the library.Â The owners would like to put things back to as original a state as possible so we are wondering if anyone has any old photos of that stretch of the road.”

Wansteadium can’t help but applaud such attention to detail. Any photos can be sent to us at info@wansteadium.com and directly to the developer atÂ hm33q33@gmail.com. 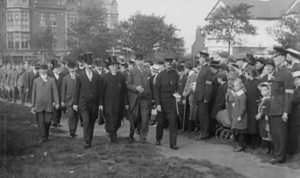 Meanwhile a newly-released archive of old video has been released by the BFI. Wanstead features in it, thanks to lots of men in top hats, some soldiers, some firemen and nurses. The film was made in 1916 and is titled “the Demonstration of the Churches”; the event was held to honour Wanstead men and women’s contribution to the war effort. The George appears to be in the background. You can watch it on the BFI site here.