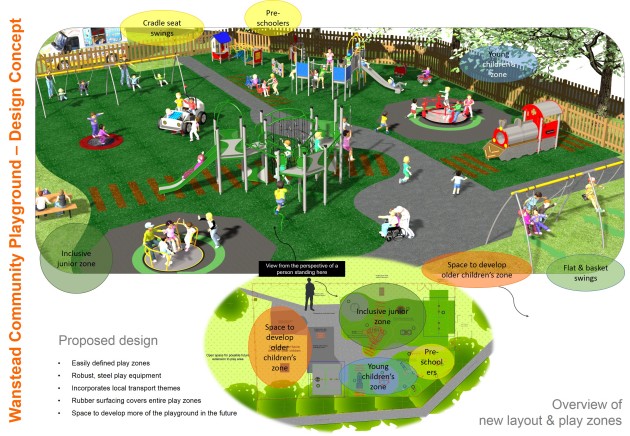 Huge props to the Wanstead stalwarts behind the fundraising for the playground on Christ Church Green.Â Today, Wednesday, marks a full year since an initial letter from Louise Cutler published here on Wansteadium kickstarted the fundraising effort which at the latest tally has raised more than Â£57,000

The determined band of parents who have been responsible for this are now seeking a further Â£23,000, at which point another Â£10k grant will be awarded. Their overall target is Â£100,000, and they’re waiting for news on a large grant application which would take them there.

The concept plan pictured includes a space where the “Viper” (playground supplier-talk for the rope swing) could be sited. It’s the most recent piece to have been added and has value for older children, the association believes.

Nicola Jarratt, a mover and a shaker, told Wansteadium that regardless of how much is eventually raised, the new playground will be installed for next Spring.

Fingers crossed for the final bit of fundraising, a solid round of applause for what’s been achieved so far, and a Nadiya Hussain-style reminder to self that anything is possible.