• The ever-popular Music in Wanstead Park is on this Saturday, from 2pm until 10pm. Bands playing include Nine Below Zero, and Wansteadium’s new favourite Wanstead grunge/power-pop/punk band Bleech. Entry is Â£10/Â£4, and full details are available here. The forecast is currently OK. (Send photos to photos@wansteadium.com and we will post some during the event.) 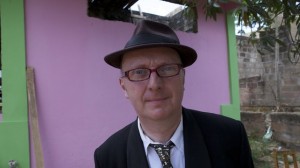 • Artist Bob and Roberta Smith, of the Leytonstone Centre of Contemporary Art, will be familiar to those who have used the new Stratford tube ticket hall. And the BBC is this week featuring a moving film of him creating and then burying a sculpture with an artist in Ghana. You can see it here.

• Drama in New Wanstead on Tuesday lunchtime when a resident came home to find a man searching his kitchen drawers. The chase down the road was witnessed by Wansteadium reader Ann Kaye who rang the police and directed them into Spratt Hall Road where the chase ended up at the Bungalow Cafe. She says: “I was walking down the road towards Snaresbrook when three people came running past me. I rang the police when I found out what was happening. They turned up very quickly and, almost cartoon like, I pointed them towards Spratt Hall Road.” A man was later arrested.

• And in more serious news, Wanstead choir Upbeat which has recorded a song about Cheddar to the tune of Land of Hope and Glory is through to the final of a competition run by the British Cheese Board (not, as one might think, a comedy invention). You can watch the video below, and when you have, you can vote for it in the competition here. Lyrics by choirmaster Tim Sutton, who told the Wanstead Guardian: “Iâ€™m a huge fan of cheese. Itâ€™s something that unites everyone, except the lactose intolerant.”

• Hedgehog update: Peony Girl reports a hog in her back garden in Langley Drive last weekend. Other sightings have been few and far between. Maybe they don’t like the rain. Please report any sightings to hedgehogs@wansteadium.com