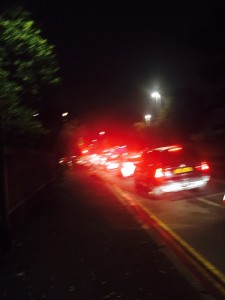 Sequels are big business, as Blake Hall Road commuters are finding out again. The restart of roadworks has led to the return of temporary traffic lights and queuing traffic even late into the evening.

The roadworks are replacing old gas mains, and were the cause of much angst last summerÂ when drivers and residents faced congestion for three months. Â There were more works just before Christmas and the current bout began last Saturday.

National Grid, which is doing the work, has said on Twitter that it should be finished before the end of the week.

Works have progressed this week and site shall be cleared by 15th January. Thank you for your patience during these works #BlakeHallRd

Route 308 is experiencing 25min delays due to road works on Blake Hall Rd. 2 in 3 buses are cutting short at Wanstead Park.