Wansteadâ€™s Christmas tree this year is being paid for by residents who stumped up the Â£3,000 in a crowdfunding effort following a council cut. But it’s more than just a bit of community effort – the story is actually a result of a change to the way local politics is to be run in Redbridge. Wansteadium thought it might be useful to set out a bit more about the changes.

What is changing?
The previous system of â€œarea committeeâ€ meetings was abruptly axed after the council elections last May. In our case, the meetings just covered Wanstead and Snaresbrook wards, and were held every other month. Each area in Redbridge had its own meetings. But they are being replaced with a single monthly meeting – a Local Forum – which will move around the borough.

What did area committees do?
The meetings were held at Wanstead Church School, and included a report from the local police about incidents or initiatives. Local residents who had applied in advance were given an opportunity to speak on something which concerned them. Then there would be a number of reports on areas for which the local councillors had been given authority by the council – typically very localised matters such as traffic calming, local CCTV, etc. The Parking Wars of 2012/3 which broke out into a beautiful harmony was largely staged at the Area Committee.

What is a favourable view of them?
That they were a sign of neighbourhood local decision making, even in a London borough. They were a regular chance to raise issues – or complain (or indeed on occasion shout) at oneâ€™s elected councillors. They were parochial, but that was rather the point.

What is an unfavourable view of them?
That they were expensive to stage, inefficient, appealed to the same old local busybodies, and did little to enliven local democracy.

How many people went?
As Wansteadium reported in January this year, not always very many. At that particular meeting, which did not have a huge amount of interesting business on the agenda, there were seven officers (i.e. paid council members of staff), six (unpaid) councillors, and 20 (paying) residents.

So we did some comparison – and in this diagram the blue line represents Wanstead and Snaresbrook – we concluded the area was â€œeither more afflicted with controversy, or are more prepared to get stuck in” 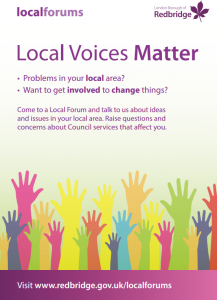 How will Local Forums be different?
There will be 12 meetings in Redbridge a year, compared to 40 Area Committee meetings. They will move around the different parts of Redbridge – so just two per year will be held in Wanstead. The first will be held at Wanstead Library on the afternoon of the 18 February 2015 – which proved controversial since area committees were held in the evening. The council has promised that the second Wanstead meeting of the year would be held in the evening.

The forums will have two elements – a “market place” at which residents could “browse stalls staffed by Council officers, Councillors and partner and voluntary sector organisations to discuss issues such as planning, parking, cleansing, housing and payments and benefits”.

The second element will be a “more formal â€˜question timeâ€™”, at which the leader or deputy leader of the council will attend with senior officers (e.g. the head of the planning department). Other councillors are welcome to attend too – including those for the particular area which is hosting that forum. Inspite of its billing as a â€œquestion timeâ€, a council spokesperson says â€œit will not be a panelâ€.

One clear strength of the new model over the old is that the leader and deputy leader of the council will attend – which was not the case with area committees. So for residents seeking to call the council to account, but who do not wish to do so at full Redbridge-wide meetings, it will be an opportunity to question the people who are actually in power. Local councillors may not, after all, represent the party which controls the council so would not necessarily be able to justify its actions.

How will issues be raised?
A common frustration with the previous system was that questions generally needed to be tabled in advance – this led to irritation of people who had just turned up wanting to raise an issue. With the new question time, question may be submitted in advance â€œor taken from the floor on the nightâ€. (Or, presumably, the afternoon.) The council adds: “If it becomes clear at the meeting there is a lot of interest in a particular topic, then time would be given over to discuss that in more detail.â€ For residents who have an issue which they do not want to raise publicly, there will be opportunity to speak to the councillors in private.

So will local democracy be any stronger?
The previous network of area committees were axed because, the council said, they were “out of date, poorly attended by residents and lacked participation”. Will the new local forums be any stronger? Itâ€™s true, the chance to question the leader of the council may well be a draw. And the scarcity of the opportunity (once or twice a year instead of the previous five or six times) may also provide a sense of occasion. However, the figures on attendance, above, seem to indicate – as one might expect – that local government per se is a minority interest (full disclosure: it’s an interest held by Wansteadium, sadly). When things are going just fine, people tend not to attend. But when there is a problem or issue – be it parking or speeding or proposed development – then people in Snaresbrook and Wanstead have turned out in numbers. These occasions may not coincide with a six-monthly meeting.

Will much money be saved?
Wansteadium has requested an assessment of this from the council (and will update readers when we have received it). There will be fewer meetings in a year – down from 40 to 12. The meetings will however be more ambitious affairs, with more council officers in attendance (i.e. people who are paid to be there). This presumably will be one of the things which will be included in the review of the new system which the leader of the council, Cllr Jas Athwal, has said will take place after the first 12 months.

So where does the Christmas tree come into it?
Each area committee had a few thousand pounds allocated to it from central council funds. It could decide how to spend this money, within limits. Typically the money in Wanstead was shared between Music in Wanstead Park, the Wanstead Festival, CCTV, flower beds, benches, Christmas lights and Â£3,000 on a Christmas tree.

How can a Christmas tree cost Â£3,000?
Good question. Forgot to ask that one at the time.

Is there an element of a political punch-up?
There is clearly some politics behind it. The area committees, though not set up by the Conservatives, served most of their years when the council was run by the Conservatives. Labour took hold of the council last May and followed through on its policy to abolish the committees. The funding for the Christmas tree was one of the pieces of discretionary funding they withdrew, and it was Conservative councillors who organised the crowdfunding which will now pay for it. Several other things funded by the discretionary money will continue.

Did we get anything wrong here? Email info@wansteadium.com if you think we did.

12 thoughts on “Explained: The changes behind the Christmas tree”